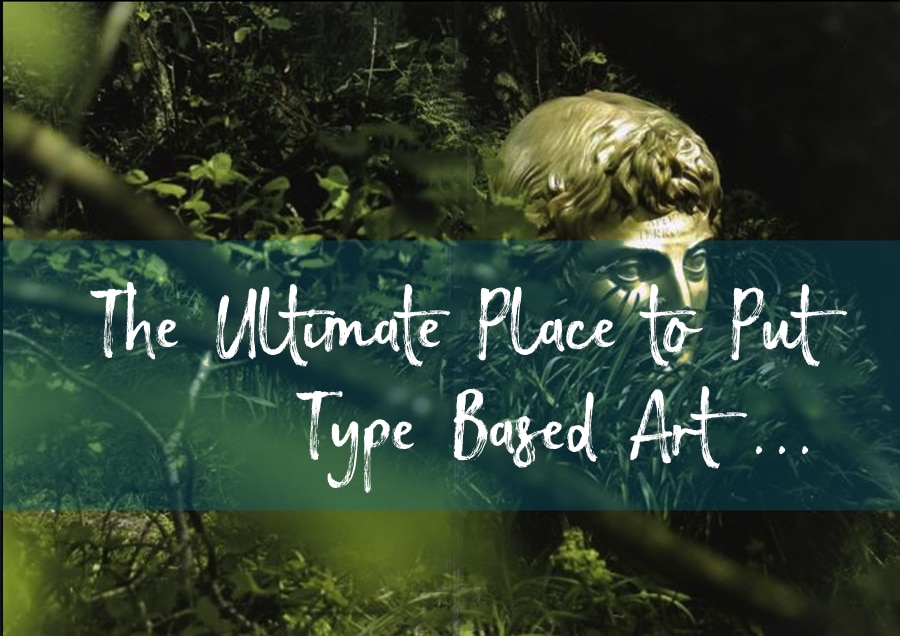 Type based or typographical art is still the popular choice for eclectic interiors and pocket sized ‘street’ philosophy can now be seen on at least one wall in just about every home in the UK – some specimens more creative and insightful than others I have to say and don’t get me started on the ubiquitous LIVE, LAUGH, LOVE or I might just implode.

It got me thinking again about getting creative in the garden and having got myself a bit over excited watching the three remaining flowering plants we have come into full bloom this past week, I couldn’t help but be inspired to write another garden post to celebrate ( I did warn you).

I like to think our gardens are as an important as the rest of the home (even if that ‘garden’ is only a window box!) and it’s design should be animated with or inspired by art in the same way. With all of this in mind, I thought you might like to see the work of an artist who could just be the godfather of all this typography art – he’s someone whose work I was shown in my final year of art school and it had a huge impact on the direction I took in making art. It’s as fresh, edgy and relevant today as it was when it was first revealed almost half a century ago.

The amazing thing about Little Sparta is that first and foremost it’s an artwork (albeit on a giant scale) and then it’s a garden. Ian Hamilton Finlay, the artist behind it, created this sculptural collection cum horticultural wonder over decades along with his wife Sue on a five acre plot of land her family gifted to her in 1966 just outside Edinburgh in the Pentland Hills. You might be wondering about the name, well Edinburgh nicknamed itself ‘The Athens of The North’ partly as a nod to the greek inspired architecture dotted around the city but also as a bit of a boast to be seen leading the way in philosophy, economics and medicine in the eighteenth century.  You could say that Ian and his wife Sue, approached the design of the garden as a gallery, a display plinth and an armature for showcasing Ian’s sculptural artworks in wood, metal and stone and soon these theatrical elements became so intertwined that the process of creating often involved digging and planting as much as shaping and sculpting.

Ian Hamilton Finlay was interested in words and letters both in their meaning and their form and shape. He used Latin text, word play and letter spacing to shuffle the order of our thoughts and force us to reinterpret the words with another meaning –  a clever trick I love to see used in graphic design. The sculptures and words were really created as symbols with a deeper meaning  – a commentary on the world around him at the time, on society, on historical events such as world wars as well as philosophical thoughts on life (he died in 2006 at the age of 80).

Even without knowing any of this though, the artworks fit in a contemporary setting both in terms of landscape and social changes – the materials he used were timeless and still seem exciting to this day. A giant Gold Head of Apollo is placed among the grasses so that you discover it when you glance up as you emerge from an arch of wild branches. The whimsical ‘paper’ boat on a plinth perfectly reflected above the pond is actually carved from white marble and a metal rill that travels along an ancient stone lade stands out as a sleek, ‘modern’ statement. The movement and journey around this outdoor space is by design so that you participate in the artwork – if water is traveling horizontally , the text does too as does your eye. The repetition of the words on the slats of the bridge mimicks the rhythm of the steps you take to cross it, paths leading nowhere except to a flagstone or column with gold leaf words in ‘Latin’.  Text flowing round the trunk of a tree on chunky wood that doubles as a bench – there are so many ideas in there for us to get inspired by!

Typography taken into the garden in this considered way can be really exciting – ‘concrete poems’ made from our inner thoughts, meaningful song lyrics or fleeting memories – woven into our gardens in unexpected ways.  Little Sparta was once a plain old farmland called Stonypath and the clues are in the livestock gates and field fence posts that now have text carved into them transforming them into permanent artworks. I think the magic happens in working mostly with what you have like this. Really looking at the textures and surfaces and seeing opportunity to create that ‘conversation’ I was talking about in my last blog post on bringing art into the garden.

Just a quick glance around your own neighbourhood  or a few clicks on google and you’ll discover a stone mason, lettercutter,woodcarver or laser cutter that isn’t too far away.  Found objects, stones, logs or revamped garden furniture will come to life with beautiful type faces – introducing a colourful or unexpected material at a carefully chosen vista will trip the eye and make it linger longer and if that’s not what we want to do in our gardens then I don’t know what is.

Autumn Equinox Savings - 20% off All Products Until 09 October! Dismiss