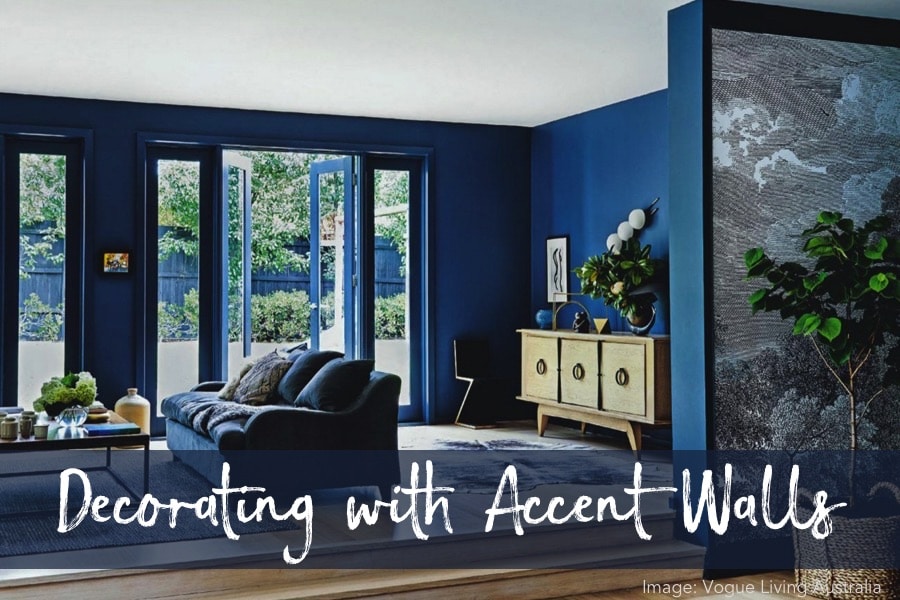 …what will you say with yours?

Don’t know if you’ve heard but apparently decorating with ‘feature’ walls is out. Tchsssh so harsh! – it’s hard not to feel a bit sorry for these discarded heroes of fashion, cast aside and sniggered at with a ‘to-think-anyone-thought-that-looked-good’ smugness that only comes when we know the evidence of our own decorating faux pas have been swiftly covered up.

I’m not a great believer in following fashion to the letter but, if something makes sense and really works then fashionable or not I’m in! Enter the new ‘accent’ wall, swaggering in with its get-out of-my-way-fabulousness, it falls into both the ‘less is more’ but also the ’more is more’ camps and therein lies its intrigue and cleverness.

In contrast to the characteristics of the ‘old’ feature wall, – think white walls then jumping out at you a completely irrelevant oddly decorated wall (often with black, red or purple silver pom pom flowers to add insult)- the new accent wall is a much more charismatic addition. It can be achieved with unexpected artworks ( also see my gallery wall post), a subtle texture or expressive wallpaper or even a giant mural – one that compliments the other colours in the room – the list goes on. Either way, it brings a room together by adding little or large amounts of drama without dropping a bomb on the whole space.

I suppose if you think about it an accent is a layer of detail that gives away so much of the character but isn’t the big picture – so that when you first enter a room, (just as you would meeting a new interesting friend) you like what you first see in the focal points and then you notice the accent which adds a little something to the character and individuality of that space ( or person to continue the analogy!)

I remember my first conscious thought about how amazing the walls of a room could be and it was, probably unhealthily, at the tender age of six! I was at my little schoolfriend Jennifer’s house and we were playing a game of hide and seek. She had an enormous house and I had run down a long corridor and turned into a tiny little room which, after I finally stopped staring and closed my mouth, I realised was in fact a loo! It had a very tiny sink behind the door and just the loo, a mirror and a small window but all of this came after the main act – the wallpaper. It was gold! Not a subtle yellowy colour but actually a shiny, metallic foil-like gold with giant red and amber flower heads the size of my head. It had wild twisting dark stems that bolted across the walls and round the corners disappearing behind the mirror for a few seconds and emerging again to flood the ceiling. I had never seen anything quite like it and for a few moments I was lost in a botanical adventure with a wild boar chasing me…and….

Ahem…. anyway, it didn’t take long for the ‘seeker’ to find me and seeing my wide-eyed look, Jennifer said casually, ‘Oh we call this room the Christmas Box’. Wow! I just thought that was the most exciting thing ever on two levels; 1. That the loo had a name and  2. That it would be Christmas in there everyday!

That room really captured my imagination and it’s probably shaped how I think about every space in the home as an opportunity to do something special. It doesn’t always have to be a big statement, sometimes just arranging things in an unusual way that trips the eye and makes it linger a little longer is all that’s needed. I think if you can scan a room and take it all in in one glance it makes for a very boring space! That said, you don’t want each wall and surface to be shouting and fighting for attention. The few spaces of ‘nothing’ can be as important as the focal points and details.

If that’s the case then how come the Christmas Box was so fantastic? Well, it was a tiny space and by wallpapering every surface, even the ceiling with the same bold wallpaper it became one statement if that makes sense.

Wallpaper is something so many people are afraid of and I have to be honest, I’ve shared that fear in the past probably because most of us grew up in houses with wallpaper pasted on all four walls and like it or lump it there it was for a decade and a half at least! We think of home decorating with wallpaper as such a big commitment and something that limits our options instead of expanding them. But wallpaper is making a swift and powerful comeback as designs become more expressive and experimental and sections of wall are used as ‘accents’ (NOT ‘features’ darling!) to create texture or visual interest that adds an integral layer to a room.

If you’re shy about making bold decorating statements or afraid of commitment (!) then start with a space that doesn’t have a massive effect on the rest of the house such as a small bathroom, dining room, laundry room or even a broom cupboard – don’t laugh I’m serious! It’ll be the most amazing broom cupboard ever and your friends will come to visit just to see your broom cupboard … and I bet you’ll feeling like cleaning more because that broom cupboard will make you smile every time you open it!  In these sorts of spaces you have a licence to let out your inner peacock and flaunt those over the top flouncy feathers! Every loo visit for a guest could be an incredible experience of wonder and enchantment – be warned it might cause queues!

Whether you use wallpaper, murals, an unusual surface texture or artworks, accent walls in home decorating allow you to play a little – they are the interiors’ equivalent of dancing like no one’s watching or even just a subtle cheeky wink – whats not to love!

4 Thoughts to Decorating With Accent Walls