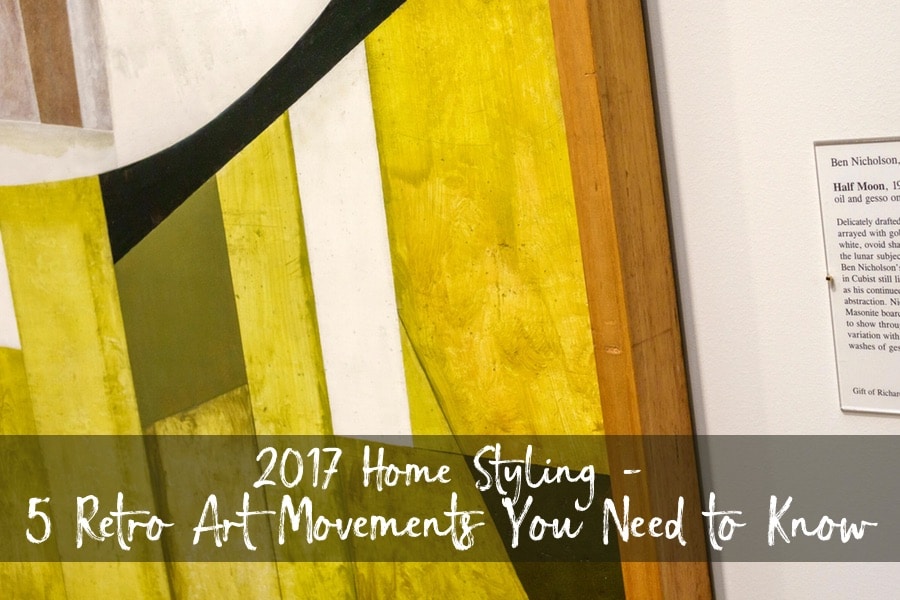 Hey my first blog post of the year woohoo! January is gone ( hopefully along with its weather!) – always a month of resetting, reflecting and forward planning and now that we stand peering out at the year ahead, it may seem a bit frivolous to be talking about interior trends when the walls of the world appear to be cracking at the seams. But here’s the funny thing, sometimes a stormy landscape makes for a more interesting backdrop and this is exactly the kind of mood that gets passions fired up and fuels the most intense and creative ideas. As you may know I’m super passionate about the relationship between art and interiors and I thought I’d give a shout out to the connections between some key retro art movements and this years hottest interiors.

Some of the most ground breaking art movements emerged in the years leading up to the World Wars – a reaction to what was happening,  maybe on occasion a visual commentary, sometimes a protest but often the dream of something better – an alternative life. A movement is exciting. It’s so much more than a trend and much less flimsy. It happens when new ways of thinking and behaving have a big impact on the way we live.

After the epic year that was 2016 finally left the building, 2017 was bound to open its doors with big changes and uncertainty and it seems a bit of nostalgia has set up camp. With films like La La Land and the recent release of Trainspotting 2 there’s a definite sense of revisiting a time lost with fondness – almost seeing it in a new way with fresh eyes. Something along those lines is happening in interiors. Our homes are becoming our caves to escape from a world that no longer seems familiar (read bonkers!) – a sanctuary where we can express our individuality and ideas freely and create a comforting world of our own.

The interesting thing is that there are 5 retro art movements that are handy to know in understanding this latest interiors shift and I thought I’d put together a snap shot of these to show how could influence our homes this year. It’s not intended to be a history lesson or a you-must-do-this-to-be-on-trend but more to help you can navigate the trends out there, work out where they’re rooted and how that fits with your own style – it might even trigger new ideas along the way so here goes…

First up is Modernism – it came about in the late 1800’s when people were hungry for new ideas and progress, it continued through the 1920s and 30s all the way to the 70’s.  It’s ideas were based around an ideal of a perfect world – a need for simplicity and clarity in what was becoming a messy world ( two wars happening within a pretty short period). Pattern, motifs and human subject matter were removed and soft geometric forms and simple shapes were used to represent life and values – it  was a way of bringing balance and order to the masses by removing all the cultural clutter if you like! Experimentation with machines and materials symbolised progress and a bright future.

Probably two of the most famous names in modernist architecture, Le Corbusier and Mies Van Der Rohe – still influential to this day for their pared down vision of modern living – felt that the shape and form of a building should reflect how it was to be used opting for modern mass produced or machine formed materials like concrete and steel. Artists such as Ben Nicholson, Constantin Brancusi and Barbara Hepworth were big players in this movement with sculpture, paintings and collages all using simple forms and shapes and machine finished or precision cut surfaces.

Next up is Art Deco or to use it’s full name ‘Arts Decoratifs’ emerged in the early 1920s in Paris and lasted until the late 1930’s. Followers of this movement took traditional craft and applied arts from around the world mixing these with new technologies of the time using bold geometric patterns and glamorous materials like marble , silk, coloured opaque glass and brass, materials that represented a luxurious lifestyle but one that should be available to everyone.

Art Deco was about ‘joie de vivre’, lighthearted and energetic about life as was often played out in Hollywood films ( you know the kind where they float about in smoking gowns and pose on satin quilted beds or velvet sofas with draped leopard skin and a wafting ostrich feather)  Exotic travel brought in the patterns and colours from faraway places such as Japan, Egypt and Africa in the form of solid blocks of colour, bold geometric lines and animal print.

Art Deco has always had its fans, but now rather than a pastiche ( of a pastiche!) its a careful and balanced use of form mixed with simple well placed furniture in luxurious contemporary materials, simple lines and tactile surfaces, for a style thats adventurous and individual.

On to Primitivism, probably not a term we’d use today (!) but this was in fact the name given to the borrowing of motifs, folk art and tribal patterns from the cultures of far away places to influence western art at the time. It was thought these cultures were spiritually richer because they lived a ‘simpler’ life which probably does rings true with the way we think today rightly or wrongly. Artists such as Paul Gauguin and Pablo Picasso were famous for using Tahitian motifs with bold patterns and african masks respectively as influences in their work.

You could call it Tribal / Artisan – the world has shrunk as they say so everyone borrows from everyone else but there’s still a hankering for the ancient and the rare as well as soulful textures to balance the hard edges of our 21st century lives.

The Fauvists (french for ‘wild Beasts’  as they were scathingly called) created a shorter lived movement which grew with and then morphed into Expressionism .The leaders were thought to be Henri Matisse and Andre Derain who painted wildly using bold ‘emotional’ brush strokes with expressive and bright contrasting colours. The idea was to bring strong mood and emotion into the painting using unexpected colours often at opposite ends of the spectrum to make them really jump out and almost make the painting move.  Colours could be used freely without having to accurately reflect what existed in nature.

After decades of neutrals, colour is punching hard this year. Think bold artworks contrasting with walls and statement furniture and combinations of materials, clashing patterns and bold colour combinations from opposite ends of the spectrum such as blue and orange, green and pinks as well as complimentary blues with greens and pinks with orange . Expressive graphic designs with a painterly marks.

Last but not least, this came about in the early 1900s and ran in parallel with fauvism but continued on to change form influencing future movements . This movement gave a voice to the artist rather than purely showing what he or she saw in nature, the individual viewpoint, mood and emotion of the artist came through often in a romantic and charged way so as to stir emotion in the person viewing it . Paul Klee, Edvard Munch, Egon Schiele are among the famous artists within this movement  – it gave license to let loose your inner self!

Bold colourful walls, artwork including sculpture, wallhangings, neon lighting, placed in unexpected places that say something either literally or through bold marks or imagery about you. An extension of the eclectic look mixed with a bit of surreal humour, handpicked objects old and new that reveal your story, the places you’ve visited, a memory you hold dear, editing is key but bravery is a must – let the world see who you are , life is short!

So there you go, a little whistle stop tour of 5 retro art movements that are shaking up the interiors world in 2017 . You can say ‘Ahaaaa! ‘ when you start to see this years interior trends sprouting left right and centre.  Hopefully you’ll be able to sail along plucking only the bits you love and crafting a home that says “this is me!”

A home sanctuary is the goal of 2017, whether that be a ‘she-shed’ in the garden, dark cocooning walls that make you want to stay home, eat home cooked food and light candles, getting out the ‘good’ china or glassware that normally sits unused, serving food in a beautiful tactile hand thrown ceramic bowl – having a beautifully crafted piece of furniture or a bold and eccentric artwork plonked on your kitchen table, we all need a few beautiful objects around us to balance us and weave some fun into our everyday life – they lift the mood and might just help us get through this crazy year!

Autumn Equinox Savings - 20% off All Products Until 09 October! Dismiss