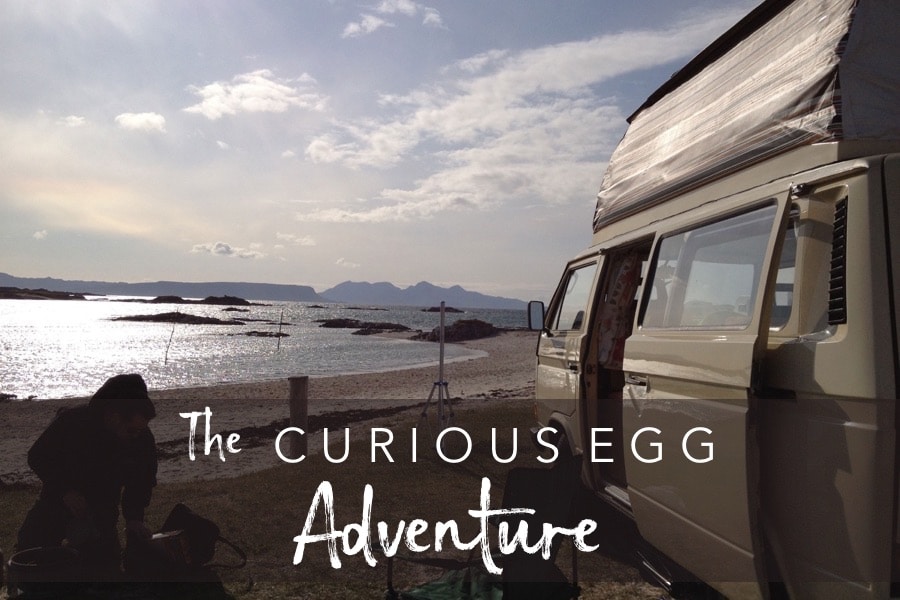 There’s something childishly thrilling about a tiny living space, especially one on wheels that you will call home for the next three months and that will store your belongings, bed and kitchen area in ingenious little nooks and crannies ready for an adventure! I also enjoy the problem solving, discipline and compromise that comes with trying to live normally within them – not sure if I’ll feel the same in three months time! I think I’ve always been attracted to small spaces  – I was the child who wanted to live on the second top branch of the family Christmas tree next to the blue fairy light  (weird, I do realise). Whether it be tents lit with twinkly lights, quirky handpainted caravans or a cosy little wooden hideway in a tree or garden, there is a magical sense of mystery and playfulness that surrounds them making you want to peek inside and maybe live there.

Well, now we are about to set off in ours. After months of organising, writing lists, a few wobbles and then a few more lists, the three of us are pulling away- slightly emotionally- from a kerbside of waving family and my very small, over excited nephew who is still running after our van screeching incoherently (my nephew …not the van thankfully) as we turn the corner.

Don’t be fooled though, the run up to the departure date involved a healthy degree of stress and manic rantings not least because until about ten days before, we didn’t actually have any means of travel! We had decided a while ago that our own beloved campervan ‘Martha’ just would not thank us for taking her on the several thousand mile trip round Europe and realistically she might not get us further than Carlisle…well not before midnight! Finding a modern equivalent would prove testing to say the least and time was running out.

Thankfully somehow it all came together. After a two-day whirlwind of phone calls, a very early morning flight and a ridiculously long drive from the other end of the UK, Roddy showed up around 10.30pm in our new wheels.

Enter ‘Vic’ – a shiny superduper ‘Buzz Lightyear’ of the camper van world, a slick black VW California! Now please understand, this is a bit of a lifelong fantasy for Roddy, he has had a long love affair with VW campers, his first being an old yellow T25 similar to Martha that he bought when he returned after a Australian gap year to start work in Glasgow city centre where he didn’t need a car. Many of our early dates were spent with him waxing lyrical about his old van, its special stripey pop up roof and the familiar smell of the rumbling oily engine. He got me hooked, literally! His dream has always been to drive a T5 – even for just a day- and here we are with our very own to take us round Europe, its a special moment!

N.B. We will be keeping Martha safely home and dry until we get back to continue the little jaunts around Scotland that she loves!

Thankfully our journey to London is relatively event free and we arrive for a much needed overnight stop with our good friends enjoying an evening of home cooked food, wine and great chat – even Piko had an evening of fun with our friends’ spaniel Archie.

Tomorrow we catch the Eurtounnel to Calais – very excited!